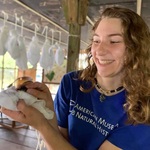 Cascading effects of  habitat loss on ectoparasite communities and their associated b...

June 12, 2020
Suitable habitat fragment size, isolation, and distance from a source are important variables influencing community composition of plants and animals, but the role of these environmental factors in determining composition and variation of host-associated microbial communities is poorly known. In parasite-associated microbial communities, it is hypothesized that evolution and ecology of an arthropod parasite will influence its microbiome more than broader environmental factors, but this hypothesis has not been extensively tested. To examine the influence of the broader environment on the parasite microbiome, we applied high-throughput sequencing of the V4 region of 16S rRNA to characterize the microbiome of 222 obligate ectoparasitic bat flies (Streblidae and Nycteribiidae) collected from 155 bats (representing six species) from ten habitat fragments in the Atlantic Forest of Brazil. Parasite species identity is the strongest driver of microbiome composition. To a lesser extent, reduction in habitat fragment area, but not isolation, is associated with an increase in connectance and betweenness centrality of bacterial association networks driven by changes in the diversity of the parasite community. Controlling for the parasite community, bacterial network topology covaries with habitat patch area and exhibits parasite-species specific responses to environmental change. Taken together, habitat loss may have cascading consequences for communities of interacting macro- and microorgansims. You Are More Than What You Eat: Differential Enrichment of Microbiome Functions Acros...

February 02, 2021
Animals evolved in a microbial world, and their gut microbial symbionts have played a role in their ecological diversification. While many recent studies have reported patterns of co-diversification of hosts and their gut microbes, few studies have directly examined the functional contributions of these microbes to the dietary habits of their hosts. Here, we examined functional enrichment of metabolic pathways in the gut bacteria of 545 bats belonging to 60 species and five terrestrial feeding niches. We found that hosts of different dietary guilds had differential enrichment of bacterial functions that may be adaptive to their respective diets, and that metagenome functions were highly predictive of host feeding guild. We detected little evidence of host phylogenetic effect on gut metagenome composition, suggesting that diet likely overrides host evolutionary history in structuring functional pathways in the gut metagenome. Our results further suggest that bats may have evolved to partially rely on their gut microbes to fulfill critical metabolic pathways, including essential amino acid synthesis, fatty acid biosynthesis, and the generation of cofactors and vitamins essential for proper nutrition. This work represents a comprehensive and novel insight into the contribution of gut microbes to vital metabolic processes in a diverse Order of wild mammals.
DNA Metabarcoding Reveals Dietary Network Structure in a Neotropical Bat Community

October 11, 2020
Bat communities in the Neotropics are some of the most diverse assemblages of mammals on Earth, with some regions supporting more than 100 sympatric species. This diversity raises the question of how so many species can coexist without apparently competing for resources. Because bats are small, nocturnal, and volant, it is difficult to directly observe their feeding habits, which has resulted in their classification into broadly defined dietary guilds (e.g. insectivores, carnivores, frugivores). Apart from these broad guilds, we lack detailed information about what bats eat and therefore have only a limited understanding of interaction networks linking bats and their arthropod, plant, and vertebrate prey. In this study, we used DNA metabarcoding of plants, arthropods, and vertebrates to infer the diets of 25 species of bats from the tropical dry forests of Lamanai, Belize. We hypothesized that bat diets recovered by metabarcoding would show a more granular structure than implied by the broad guilds to which species have been traditionally assigned. Our results indicate that bat communities from Lamanai can be organized into eight distinct sub-community modules and that bats partition food resources on a finer scale than previously recognized. This study is the most comprehensive treatment to date of Neotropical mammal diets at the community level, and provides a useful framework for testing hypotheses about coexistence and niche differentiation in the context of modern high-throughput molecular data.